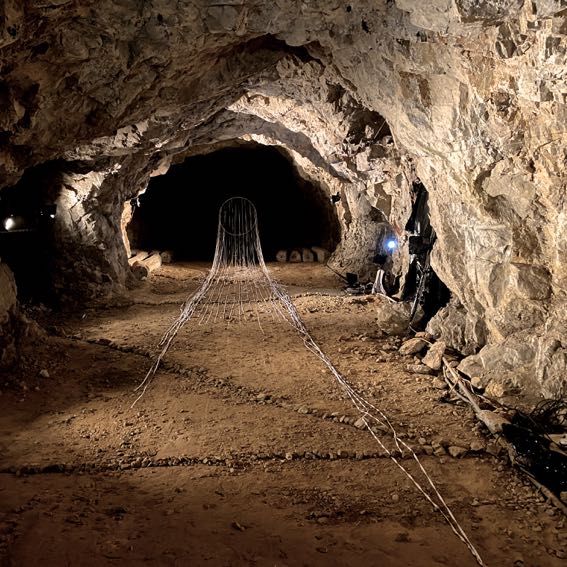 On March 20th, the public art-installation titled IN-SIDE-OUT was dismantled. This work had been created by Martina Tritthart and Holger Lang in Graz, Austria, in July 2020. We produced it for the exhibition event "Solaris" that happened at the tunnel under the "Schlossberg", the castle-rock or castle-hill at the capital city of the Austrian state Steiermark. In the "Schlossbergtunnel", this installation contained a dynamic light and sound environment that ran without problems for almost 9 months. In the 234 days of its existence, the only technical problem was once the death of the audio-player and the interruption of the programmed light sequence, both caused by an electrical problem that had affected all installations. We needed a whole day to take all elements apart and emptied this cave-like space for new projects to follow us.
Look for the words "IN-SIDE-OUT", our names (Martina Tritthart, Holger Lang) and our joint operational organisation, called "mutual loop", or "mutualloop" to find more information and audio-visual material about this project. As the tunnel is connecting the upper part of the castle hill with the lower street level near the Mur river, our work had been seen by many people passing through the rock.
It most likely had been a brief impression on many more people than I expect ever to see this post here.


Unrelated, but not less significant.
Or, related, but not significant.
A project that was on display for the most of the last year. For the most of the last year I avoided writing by hand. Writing by hand is very different to writing on a machine, like a computer, and even more different to writing online, like here and now.
About a year with only sporadic handwriting has passed by, and at the end of it I picked up the public typing again, after a very long break. I do not know if there is any connection, but I will try, from today on, to do both, as much as possible and fitting into my days. Does it matter?
Is this a rhetoric question?
Do you care?
Rambling flow of thoughts.
wandering star