working at your home office 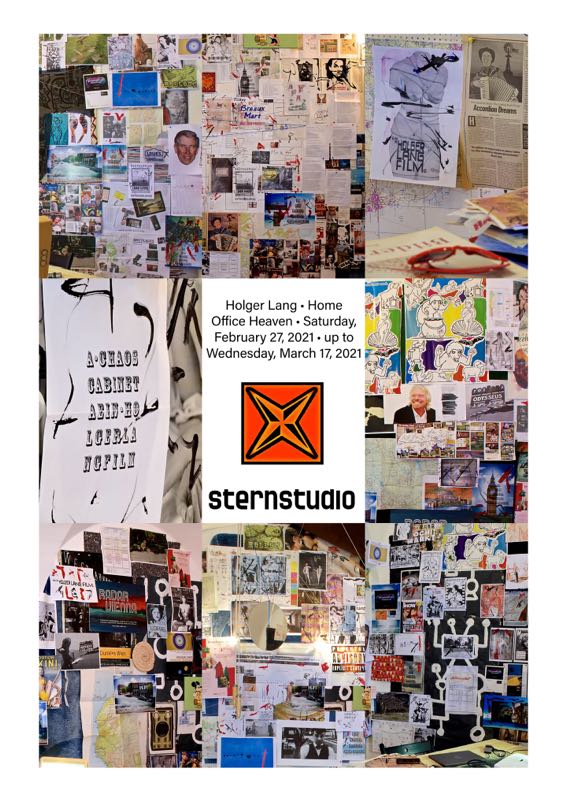 On March 18th, I emptied and cleaned up the gallery space that I had used for my most recent installation. Late at night on February 26th, I finished setting up the environment that I called "Home Office Heaven". It existed for 19 days only, but it could also have been only one day or only one hour; the duration did not matter to me. "Home Office Heaven" is a work that follows a series of spatial arrangements, spatial compositions of various things. Usually, these settings contain images, sounds, objects and projections, lights and shadows, but these elements may also vary. Lights play a role, and I define specific ways you can move within the space. There is a lot to see, but nothing is explained, and nothing seems to make any deeper sense. Memories and remains stand or hang or lay or hover next to randomly appearing elements and site-specific details. I take and borrow, I acquire and find, I collect and I construct, I create and I produce all the small pieces - then I place them in an unplanned and undersign order. This order of elements, of images, sounds, objects, projections, lights, and shadows, this order is always temporary, and nothing stays the way it appeared. Some elements may get used again in further future installations, but there is no recipe or intent in the back of my mind. These spaces are established very fluently, intuitively and following very sketchy ideas that come and go as I work on at the specific location. I do enter with some ideas and some material, but I am open to getting pushed and pulled into unexpected areas and undiscovered zones. A room, an area, a spot, a place is arranged and rearranged, furnished and equipped, filled and then emptied again. It is a temporary dwelling but nothing to really live in; it is a place of work that is also a habitat for connections, overlaps and interactions. As long as the unexpected and unforeseen that may appear within such spaced can still surprise or inspire me a bit - as long as I feel comfortable for a brief moment in the environment - as long as it satisfies me for a second - it is working for me. I build a space and share it if possible, but I am also happy with it on my own. Sharing can be important and may be required to gain recognition, it may be uplifting or exciting, but it may also be exhausting and demanding. So either way, for me alone or for a large audience, my temporary artistic cribs come and go, again and again. Here I had one that I called "Home Office Heaven" for less than 3 weeks.
That's fine too.